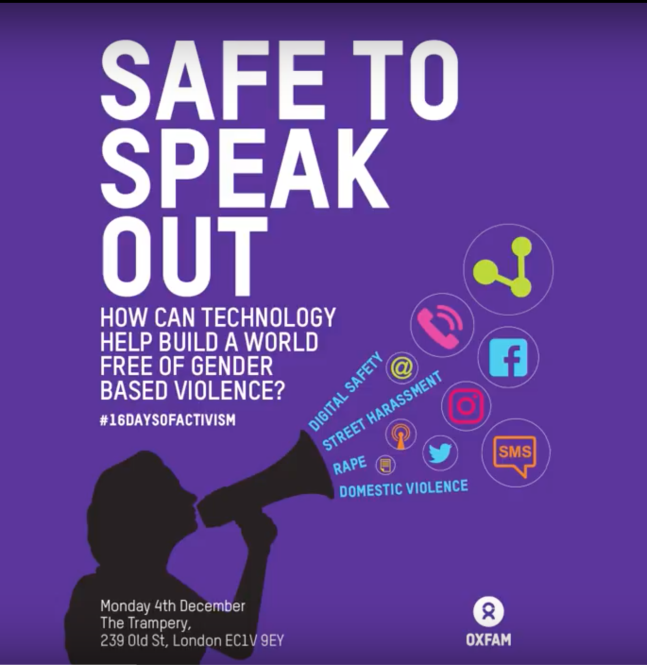 Every year from 25 November, the International Day for the Elimination of Violence against Women, to 10 December, Human Rights Day, activists around the globe come together for 16 days of activism against Violence Against Women (VAW).

To mark this in 2017, Oxfam organised an event titled #SafetoSpeakOut. This event was particularly focussed on VAW and the links between online and offline violence. The intention was to bring together policy-makers, inspiring speakers, business and academics to ask: how can technology help to build a world free of violence against women? As noted by Amy O’Donnell in Oxfam,  “New forms of violence and harassment in digital spaces are excluding people from participating online, as well as affecting their lives more broadly. On the other hand, technology can help counter violence against women and girls. nitiatives for reporting have helped women access support or feel safer, and they can send a strong advocacy message, building a collective dialogue that can help challenge the social norms that allow such violence to happen in the first place. #MeToo is the latest in a long line of initiatives where those who have been abused can share their stories.”

On Monday 4 December 2017, our project PI Ayona Datta was invited to the #SafetoSpeakOut panel on VAW organised by Oxfam. Speakers in this panel with Ayona included Hera Hussain who founded Chayn in Pakistan which leverages technology to empower women against violence; and Ana Brandusescu, who is Policy Officer at the Worldwide Web Foundation focused on driving a more inclusive use of data and enhancing digital rights. This event linked up with a co-creation event Oxfam are holding in Lebanon, devising digital solutions to tackle real world problems in the fight against violence against women.

The key focus of Ayona’s talk was that VAW cannot be separated from wider forms of structural and intimate violence. Indeed, VAW is intimately linked to forms of infrastructural violence that excludes women and girls from accessing urban basic services – affordable housing, public transport, water, waste, sanitation, energy and so on. The effects of these exclusions are not universal – rather they are intersectional and geographical. Women in informal settlements, low income neighbourhoods consistency face sexual harassment and violent as they attempt to lead their everyday lives in the context of broken infrastructures. The public water tap, public toilets, open land for defecation, unlit streets, illegal taxis, abandoned railway lines, pavement homes – all become hotspots of violence. Here often the fear and perception of violence is stronger deterrent to women to have the freedom to take decisions as full citizens across public and private realms. This also has uneven consequences on younger women, women of lower castes, working classes, LGBTQ and minority religious groups. Ayona summarised her talk noting that digital technology cannot in itself end deep-rooted social inequalities, but if we accept that information is another form of infrastructure, lack of access to information technology reinforces the real and imagined violence faced by women and girls in the context of disconnectedness urban infrastructures.

To support this argument Ayona referred to her ongoing work with Safetipin producing story maps of VAW in Delhi and her new collaborative work funded by British Academy on Disconnected Infrastructures and Violence Against Women.

This site uses Akismet to reduce spam. Learn how your comment data is processed.

Unless otherwise stated, images on this site are from sources providing high-quality, rights-free images for which we are very grateful.